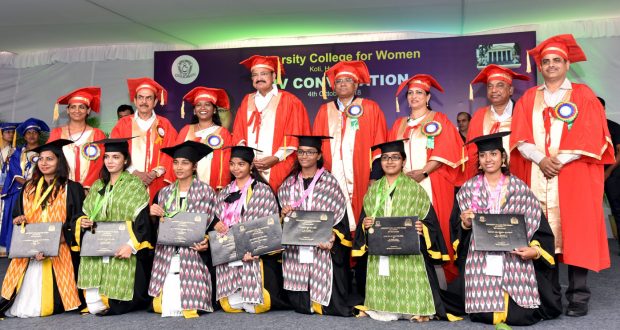 The Vice President, Shri M. Venkaiah Naidu with the Gold Medal winners, at the XIV Convocation of University College for Women, Osmania University, in Hyderabad on October 04, 2018. The Deputy Chief Minister of Telangana, Shri Mohammed Mahmood Ali and other dignitaries are also seen.

Education is an instrument of social transformation:Vice President of India

Hyderabad:4/10/18:The Vice President of India, Shri M. Venkaiah Naidu has said that education is an instrument of social transformation adding that it forms the foundation for empowering women, especially in a country like India.

Delivering the Convocation address at the University College for Women in Hyderabad today, he said that no country can make progress if women lag behind. Educating a woman would not only empower an individual but an entire family. Expressing his concern over gender inequality, he warned that subordination of women in various spheres would have serious negative consequences.

Calling for breaking down walls and defying stereotypes, he emphasized that women, who constitute more than half the population, need to be given voice and space. “Empowering women is empowering entire humanity”, he asserted.

Education is not only for employment, it leads to enhancement of knowledge, enlightenment and empowerment of individuals, he said.

Observing that we need women at all levels, the Vice President called for strengthening social, economic, political and legal avenues to ensure equal rights for women. Political participation of women was extremely crucial in strengthening the democratic process in the country, he added.

Shri Naidu quoted Swami Vivekananda, who had said: “There is no chance for the welfare of the world unless the condition of women is improved. It is impossible for a bird to fly on only one wing”.

Quoting a World Bank report on the positive effects of educating women, Shri Naidu said that rise in female education levels will help in reducing infant and child mortality rates. He further said that increased earning capacity of women will also have a positive effect on children’s nutrition, health and educational prospects.

Vice Chancellor of Osmania University, Prof S. Rama Chandram, and Principal, University College for Women, Prof. Roja Rani, members of the faculty, students and parents were present on the occasion.