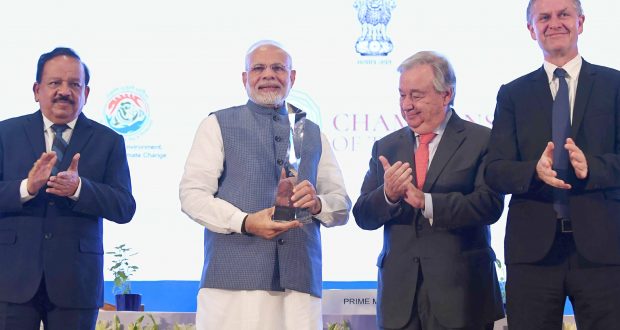 The Prime Minister, Shri Narendra Modi being presented the Champions of The Earth award by the Secretary General of the United Nations, Mr. Antonio Guterres, at a function, in New Delhi on October 03, 2018.

NEW DELHI:3/10/18: On Wednesday the United Nation’s highest environmental honour ‘Champions of The Earth Award’ was received by the Prime Minister  Narendra Modi at a special ceremony that was held in New Delhi.UN Secretary General Antonio Guterres presented the award to PM Modi for his exemplary leadership and advocating action on sustainable development and climate change. Guterres said, “PM Modi recognises climate change poses a direct existential threat to us. He knows what we need to do to avoid a catastrophe. Other leaders also recognise, know and understand, but the difference is that he not only recognises but also acts.” For his pioneering work in championing the International Solar Alliance and for his unprecedented pledge to eliminate all single-use plastic in India by 2022, the Prime Minister was chosen to be worthy for this honour a statement said. 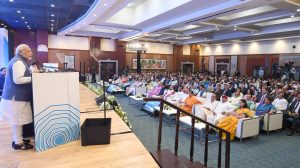 The Prime Minister, Shri Narendra Modi addressing after receiving the Champions of The Earth award, at a function, in New Delhi on October 03, 2018.

Another recipient of the prestigious award, apart from Modi is Emmanuel Macron the president of France. The award was announced on September 26 on the sidelines of 73rd UN General Assembly in New York. However, the annual ‘Champions of the Earth’ prize is awarded to outstanding leaders from government, civil society and the private sector whose actions have had a positive impact on the environment.

2018-10-03
Editor in chief
Previous: Justice Ranjan Gogoi sworn in as the Chief Justice of India
Next: Dawn-to-dusk shutdown called by Sri Jagannath Sena in the Pilgrim City turned violent