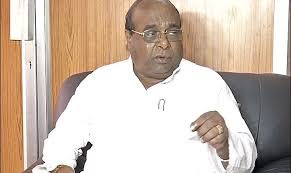 Damodar Rout announced the formation of a new political platform

in Politics October 3, 2018 Comments Off on Damodar Rout announced the formation of a new political platform 526 Views

Rout, who was expelled from BJD on September 12, has been a vocal critic of Naveen Patnaik-led State government and has been firing all cylinders with a series of corruption allegation against the 18-year-old BJD government. The new party will come into being towards the last week of current month. It will be named after the legendary of Biju Patnaik. The new party will be strengthened by true and genuine acolytes of  Biju Babu. At present, BJD carrying the name of Biju Babu has distanced itself from great leader’s principles. The party is bereft of true followers of Biju Babu”, he told reporters here today.

Earlier BJD supremo Naveen Patnaik when asked on the possible formation of a new party had said: “Those who want to form a new party, it is their business. It will have no impact in the state”.

2018-10-03
Editor in chief
Previous: College and universities students filing the nomination papers for the Students’ Union Elections
Next: Nobel Prize for Chemistry goes to scientists from US, UK