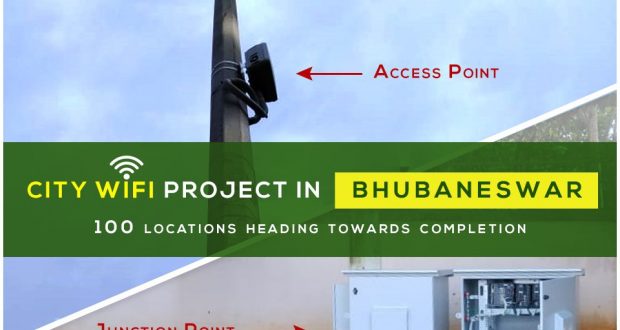 Bhubaneswar:3/10/18:The project is part of Bhubaneswar Smart City Limited and the Wi-Fi project is also part of the Master System Integrator (MSI) project, to be executed by Honeywell. The entire MSI will also include the Bhubaneswar Operations Centre, Intelligent Traffic Signal and Control System and Common Payment Card System so that all the IT-based systems across the Smart City can function in sync.There is good news for denizens of the city as the City-Wide Wi-Fi Project will be a reality soon.In Phase-I, 100 locations across the city will become Wi-Fi enabled.

These stretches are taken from the 80 km Priority Road Network of the city, which is on the priority list of the city administration.

According to sources, launching of Phase-I of the Wi-Fi network with 100 locations would be followed by 200 locations in Phase-II. It will add up later and there will be 518 locations across the city to complete the City Wide Wi-Fi Network.

However, it would be pertinent to clarify here that not every inch of the 80-km priority road network will be covered. One would have to be within 100, 200 or 300 metres reach of the access point to log in to the network.

2018-10-03
Editor in chief
Previous: Nobel Prize for Chemistry goes to scientists from US, UK
Next: Supreme Court turned down the bail of journalist Abhijit Iyer Mitra