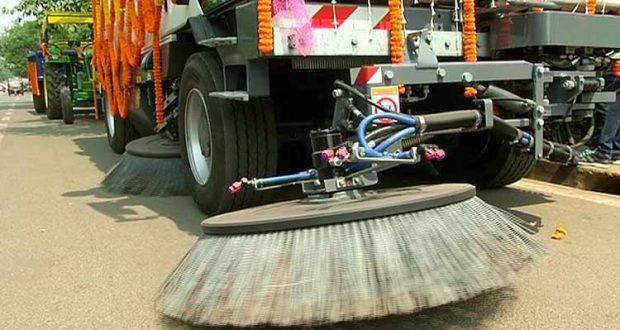 Bhubaneswar:2/10/18: In a bid to cut down expenditure towards maintaining cleanliness and checking air pollution, mechanical sweeping will be carried out on identified roads of smart city Bhubaneswar from today.

The Bhubaneswar Municipal Corporation (BMC) has signed an agreement for three years with two agencies. A total road length of 79.38 kilometres will be swept by the machines, reports said.

“Four machines will be engaged in mechanical sweeping on the main roads of the city. An estimated amount of Rs 10 crore will be spent every year and two companies from Delhi and Jamshedpur have been given the contract,” informed Bhubaneswar Mayor, Ananta Narayan Jena.

The machines work on vacuum technology and will help control air pollution as it will also collect suspended particulate matters (SPM) which causes many health problems, informed sources.

“Two machines have reached the city and other two will arrive by October 25 following which full-fledged vacuum cleaning will be carried out on major roads of Bhubaneswar. Initially, we are doing a trial run of the machines,” said BMC Commissioner, Krishan Kumar adding that the initiative will help in tackling air pollution in the city.

2018-10-02
Editor in chief
Previous: BJP Mahila Morcha had a face-off with police personnel during a demonstration
Next: National Khadi Festival 2018 inaugurated by Union MSME Minister