Top Headlines
Home » Literature » Big role in relieving the burden of the earth – that is hunger,:Varun Gandhi 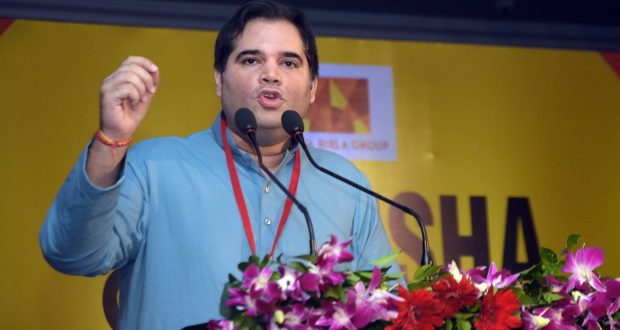 Big role in relieving the burden of the earth – that is hunger,:Varun Gandhi

in Literature October 1, 2018 Comments Off on Big role in relieving the burden of the earth – that is hunger,:Varun Gandhi 729 Views

BHUBANESWAR:30/9/18: Poet-politician and BJP MP Varun Gandhi on Saturday lashed out at the prevailing education system in the country and termed the Right To Education (RTE) a complete failure.
The country has spent Rs 3.7 lakh crore in RTE but 89 per cent of it has been spent on constructing buildings, where everything happens except education, he said in the course of his talk on ‘Media, Society and Culture – Interrelation and Emerging Trends’ at Odisha Literary Festival 2018 here .

“There are 15.5 lakh schools of which 98.8 per cent are from State boards. Though only 1.2 per cent schools belong to ICSE and CBSE, students from these school fill 78 per cent seats in IITs and 88 per cent in IIMs. If you are not in that privileged one per cent, you have no equal share of the future of the country and this is something we need to look very seriously,” he said.

Education system in the country at present, the two-time MP said, instead of working as an equalising measure is institutionalising the divide that can never be bridged. Education NPA is nearly Rs 6100 crore, which means youths are not getting jobs. What will youths do with degrees if they cannot get jobs, he asked.

During his talk, he touched upon a wide range of issues from economic and social empowerment, innovation and entrepreneurship to movements that can bring reforms and changes in the society. He cited the ‘Me Too’ movement which is stirring citizens across the globe to not only speak out but also act.
“It inspired a group of PhD students of Mewat district, one of the poorest areas of the country dominated by minorities, which has the highest illiteracy rate among women in the 10 north Indian States, to start an initiative of making women, aged above 40, literate,” Gandhi said.

He cited the example of an inefficient patent regime and attributed it to be the major factor inhibiting innovation and enterprise in the country. “In America it takes six months to get a patent while the process takes six-and-a-half years in India. Further,  shockingly, only nine per cent Indian have got patents in the country while 91 per cent have been granted to foreigners” he stated

.On environmental degradation, he highlighted the case of Bandhwari plant and Musi river. As high as 95 per cent of the population of two villages – Dera and Bandhwari is suffering from cancer because Bandhwari waste treatment plant, the biggest one in Delhi hasn’t worked for the last seven years, he said.
The BJP MP exhorted youth to plant one fruit tree on their birthday. “If you all do it you will be playing a big role in relieving the burden of the earth – that is hunger,” he stated.

2018-10-01
Editor in chief
Previous: Ramesh Prasad Mohapatra; a famous historian and archaeologist
Next: There was no secret understanding between the BJP and BJD :Dharmendra Pradhan