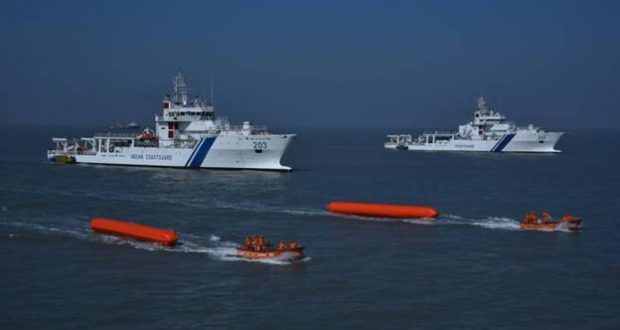 ICG to embark on voluntary discarding of Plastic Campaign

Newdelhi:1/10/18:Indian Coast Guard (ICG) is launching a campaign for voluntary discarding of the use of plastic in Coast Guard premises from tomorrow.

In order to lead by example and in support of the government policy ‘Swachhata Hi Seva Movement’, Coast Guard Headquarters, New Delhi has issued direction to all Coast Guard units in the country for encouraging ICG personnel for voluntarily discarding of plastic. The campaign will be launched from October 02, 2018 to coincide with Gandhi Jayanti.

During the campaign, ICG will conduct seminar/lectures, make available environment friendly bags and spread awareness amongst the masses through posters/banners/placards.

Coast Guard Wives Welfare Association, a volunteer organization of ICG, shoulders the responsibility in taking the lead for spreading the campaign amongst ladies and children of the society through frequent interactions.

ICG will carry this campaign to the Coastal populace through various platforms such as community interaction programme, meetings with fisheries associations/community heads, etc.

The Coast Guard Act, 1978 mandates Indian Coast Guard to preserve and protect marine environment and prevent and control marine pollution. Further, Coast Guard has been nominated as Competent National Authority by Government of India in March 2018 for co-operation on the Response to Oil and Chemical Pollution in the South Asian Seas Region.