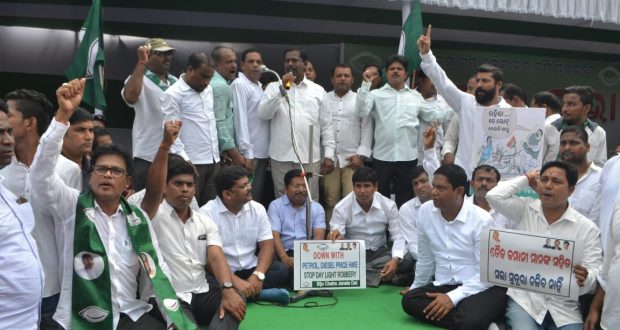 Bhubaneswar:1/10/18: The ruling Biju Janata Dal (BJD) on Monday staged a massive demonstration in front of Governor’s House here protesting the soaring petrol and diesel prices in the state.

Upping the ante against the NDA-led Union government, the activists of the ruling party organised a mega convention in the capital city to pressurise the Centre to take steps in reducing prices of petrol and diesel. The party activists took out rallies and chanted slogans against the Centre.

Notably, the ruling party workers had recently staged dharna in front of all petrol pumps from September 7 to 9 to sensitize people against Centre’s inaction on the issue.

2018-10-01
Editor in chief
Previous: Students’ union elections have been cancelled at seven educational institutions
Next: State Bank of India has lowered its ATM cash withdrawal limit to Rs 20,000 a day