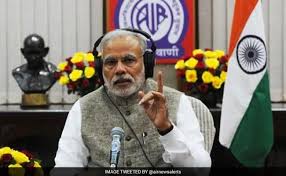 in National September 30, 2018 Comments Off on India staunchly believe in peace:Narendra Modi 1,176 Views

New Delhi:30/9/18“India staunchly believe in peace and we are committed to taking it forward, but not at the cost of compromising our self-respect and sovereignty of our nation,” Prime Minister Narendra Modi said on Sunday.

Addressing the nation on the 48th episode of Mann Ki Baat, he said that our soldiers will give a befitting reply to whosoever makes an attempt to destroy the atmosphere of peace and progress in our nation.

“India has always been resolutely committed to peace. In the two world wars fought in the 20th century, over a lakh of our soldiers made the supreme sacrifice; that too in a war where we were not involved in any way. We have never eyed someone else’s territory maliciously. This in itself was our commitment & dedication towards peace,” he added.

Speaking about the surgical strike, he said, “Yesterday, one hundred and twenty-five crore Indians celebrated the Paraakram Parva, the festival of Valour. We remembered that surgical strike carried out in 2016, where our soldiers gave a befitting reply to the audacity of a proxy war under the garb of terrorism.”

Hailing the Indian Air Force as one of mightiest and the bravest, the PM said, in 1947, when Pakistani attackers resorted to an unprecedented attack, it was indeed our Air Force which ensured that Indian Soldiers and armaments reached the battlefield promptly.