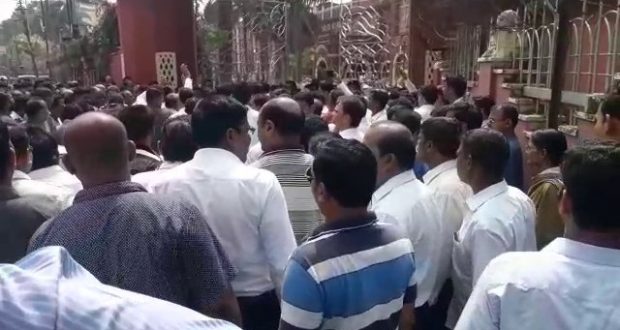 Orissa High Court and subordinate courts from going on strike

New Delhi:28/9/18: The Supreme Court has restrained the lawyers of the Orissa High Court and subordinate courts from going on strike and asked them to resume work to ensure litigants do not face any impediment in access to justice.

A bench of Chief Justice Dipak Misra issued the direction after a litigant, arrested for allegedly making derogatory remarks against the famous Konark temple in the state, moved the apex court seeking regular bail as the lawyers of the Orissa High Court were on strike since August 29 on account of a “rift” between members of the bar association and police.

The Delhi-based petitioner had got interim bail in the matter from a metropolitan court here and moved the apex court for regular bail.

The bench, also comprising Justices A M Khanwilkar and D Y Chandrachud, extended the interim relief granted to the petitioner — Abhijit Iyer Mitra — till October 5 so that he can moved the Orissa High Court.

The apex court said,”We restrain the Orissa High Court Bar Association and other connected associations from going on strike and (direct them) to resume the court work so that no impediment is caused in the right of access to justice of any litigant and likes of the petitioner can file appropriate application before the High Court to protect their liberty and agitate their grievances.”

“If the petitioner seeks any kind of police assistance for the purpose of security, the same shall be duly considered by the concerned Inspector General of Police. The writ petition is accordingly disposed of,” it said.

2018-09-28
Editor in chief
Previous: Normal life was completely paralyzed across Kandhamal district protest against rising crime against women
Next: Students’ union elections in colleges across Odisha will be held on October 11 from 8 am to 2 pm