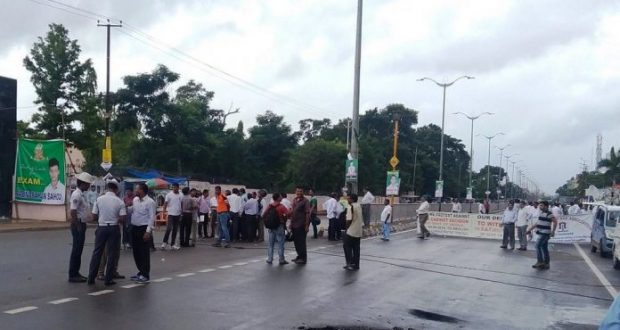 in Smartcity Bhubaneswar September 28, 2018 Comments Off on Lawyers staged a road blockade on the Bhubaneswar-Puri Road demanding the shifting of Orissa High Court from Cuttack to the Odisha capital 729 Views

Bhubaneswar28/9/18:: Tension ran high as a group of lawyers staged a road blockade on the Bhubaneswar-Puri Road near the District and Sessions Court here on Friday, demanding the shifting of Orissa High Court from Cuttack to the Odisha capital.

The agitators, spearheaded by the Bhubaneswar Bar Association, boycotted court work and blocked the busy road by burning tyres and disrupting vehicular movement for several hours.

“Shifting of the High Court has been a long-standing demand of the lawyers. We will agitate till our legitimate demand, which is for the interest of the people of the state, is fulfilled. High Courts in all other states are located in the state capitals but we are deprived of the same,” an agitator said.

On different occasions, the Bhubaneswar Bar Association members have appealed to the state government for shifting of the High Court.

Nearly 50 lawyers were arrested in August 2013 for allegedly boycotting court work and blocking NH-203 near the District and Sessions Judge Court here as part of their three-day long cease-work agitation over the same demand.

2018-09-28
Editor in chief
Previous: Students’ union elections in colleges across Odisha will be held on October 11 from 8 am to 2 pm
Next: Three educational institutions of Odisha have found place in the ‘Times Higher Education World University Rankings 2019’