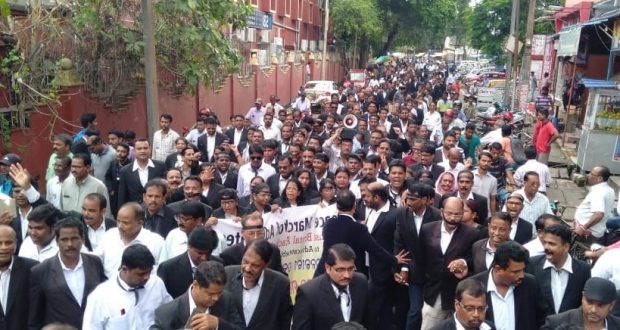 Cuttack:26/9/18: The Crime Branch of Odisha police, inquiring into the spat between policemen and lawyers, on Wednesday arrested two persons including a home guard for their alleged involvement in the attack on a lawyer in Cuttack.

The arrested were identified as Kishore Jena, a home guard and Dillip Singh.

On the other hand, the lawyers affiliated to Orissa High Court Bar Association continued their cease work agitation staging picketing in front of government offices. The lawyers’ body will hold their general council meeting today afternoon to decide the future course of action.

Notably, some policemen had an altercation with a lawyer, Debi Prasad Patnaik, following a road accident at Nua Bazaar over-bridge on the night of August 28. Later, the policemen allegedly assaulted Patnaik.

Protesting the alleged attack on Patnaik, a group of lawyers had set a PCR van on fire in front of the RDC office on the next day.

2018-09-26
Editor in chief
Previous: Kalpana Lajmi was a filmmaker whose signature had a lot of pomp and style
Next: Odisha Investors’ Meet in Chennai: Naveen Patnaik invited the industrialist to make investments in Odisha