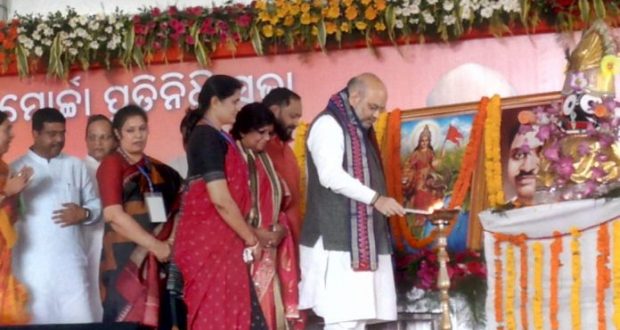 Corrupt bureaucrats are ruling the roost in Odisha:Amit Shah

Shah, while addressing a meeting of the party’s women’s wing at Puri with an aim to galvanise the cadres for the upcoming Assembly polls, sounded the 2019 poll bugle and predicted imminent fall of 18-year-old Patnaik-led government in the State.

Assailing the State government for its all round failure in delivering the goods, Shah said “enough is enough. Odia people extended support to BJD and Neveen Patnaik for almost two decades. But the State has gone down the ladder in the development index.

People will throw out his government in next election and vote for Narendra Modi-led BJP. Odisha will stride in the path of progress to become country’s no-1 State”.

The tone and tenor of BJP chief was quite belligerent and the meeting had all the ingredients of a pre-election rally.

The speech was heavily loaded against Naveen-led government with Shah giving the ‘call for a change’ in Odisha’s governance on a number of occasions.

Odisha has earned dubious distinction in topping the list in crime against women. So the Naveen-led government has lost the moral right to continue governance for a minute. A wind of change is blowing across the State. Women will take the centre-stage in overthrowing BJD government and lotus (BJP party symbol) will bloom all across Odisha, he predicted.

The Centre is generous to extend fiscal aid to Odisha.  Over 4 lakh crore central assistance was allocated to Odisha during four-and-a-half month of Narendra Modi-led central government. But sizable chunk of grants were embezzled. As a result, people of Odisha were deprived of fruits of development, he alleged.

Corrupt bureaucrats are ruling the roost in Odisha. The people representatives here have no say in governance. The government here has been reduced to be a nor-performer, corrupt and inefficient one, he said.