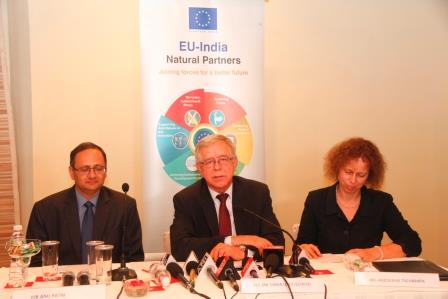 Bhubaneswar:25/9/18: As part of his first visit to Odisha, the Ambassador of the European Union to India, Tomasz Kozlowski attended an event showcasing the Clean E-Bhubaneswar Project’s achievements here on Tuesday.

The event marks the completion of the electronic waste management activity under the EU-funded Eco-Cities project and a formal handover to the local authorities.

While participating in the “EU Day” organized by the National Law University Odisha (NLUO) at Cuttack on 24 September, Ambassador Kozlowski invited the students, researchers and faculty members to tap the various scholarships and funding opportunities available under EU-funded programmes for higher education and research.

While talking to the students, Ambassador Kozlowski said, “India is overall the largest beneficiary of Erasmus financing for higher education outside of Europe since the opening of the program to third countries 30 years ago. Under Erasmus+ more than 5700 scholarships have been received by Indian students over the last several years.”

“Among the nearly 400 Indian students going to study in Europe in 2018 under EU-funded scholarships, 73 are flying to Europe this semester under the very competitive Erasmus Mundus Joint Master’s Programme, a net increase of 15% over last year’s results which demonstrates the excellence of Indian students in this worldwide competition process. There is a huge opportunity for the Indian students, researchers and universities which they should explore. We would be delighted to see greater participation by students from Odisha,” he added.

In the fall of 2018, 3 students from Odisha are starting their studies in Europe on a full EU-funded scholarship under the Erasmus + programme for integrated joint-masters providing them opportunity to study in best institutions across 3 different European countries.

Over 75 students and researchers from Odisha have so far benefitted under the EU-funded programmes.

2018-09-25
Editor in chief
Previous: Odisha Government would celebrate the 150th birth anniversary of Mahatma Gandhi for two years
Next: Medicine shops across Odisha will remain closed on September 28 protest against online sale of medicines