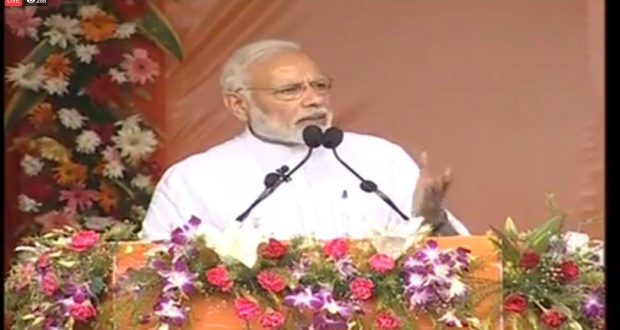 Addressing a public meeting after laying the foundation stone and commencement of work for the country’s first coal gasification-based fertiliser plant at Talcher in Angul district, Modi came down heavily on the State government and said “with people’s support to BJP, Odisha would stride in the path of progress and prosperity. It will be a ‘dream’ Odisha and centre will stand solidly behind the State which is lagging way behind in various fields”. The centre is spending Rs 13,000 crores for the Talcher fertilizer plant and it will be commissioned in three years. With its commissioning, Odisha farmers would reap benefits.  4,500 local people will get direct employment while thousands of others would reap indirect benefits with it’s commissioning, he said.

The State is lagging behind various spheres. Despite generous flow of funds, the State has failed to provide toilets to people. Open defecation still in vogue in Odisha. I had talked to chief minister Naveen Babu in this regard, he said while saying that the government in the State should imbibe the mindset to improve the lot of poor people.

Sharpening attack on the State, Modi said “health scenario in Odisha is left much to be desired. The poor state of health service network is like an open book. Women and children are suffering as health service eludes them”.

If a man from Odisha falls sick and is hospitalized in Delhi, he will be deprived of free treatment provision up to Rs 5 lakh, he said.