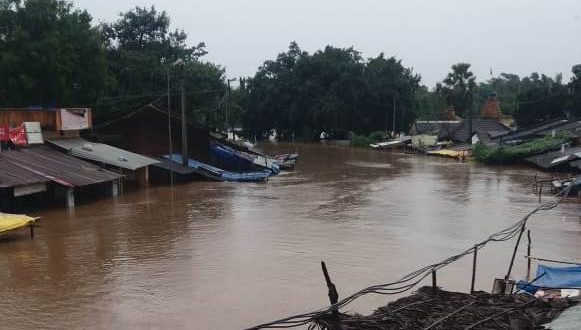 in District Diary September 21, 2018 Comments Off on Malkangiri district the most affected bybCyclonic storm ‘Daye’ 1,109 Views

Malkangiri:21/9/18: Cyclonic storm ‘Daye’ has triggered heavy rainfall in several parts of Odisha with Malkangiri district the most affected one. The flood water has inundated many villages in the low lying area.

Reportedly, Korkonda Fire Service personnel have rescued and evacuated 62 persons at village MV-50 with the help of local police and administration. Besides, the team also rescued some person at MV-3.

According to the rainfall report of Malkangiri on September 21, the district has recorded a total of 1163.8mm and an average-166.25mm. Korukonda has recorded the highest rainfall by recording 403mm in the last 24 hours.

Vehicular traffic between Malkangiri and Balimela has been affected as road at MV-11, Korukonda and MV-37 are inundated.

On the other hand, bridges at Kangurukonda and Potteru were submerged following which vehicular traffic was affected between Malkangiri and Motu.

Flood water has gushed into Poteru police station, while patients at the Janabai health centre faced hardship as water entered into the hospital.

Medicines and other drugs have also been damaged in the flood water.

Meanwhile, the district administration has cancelled leaves of the officials and engaged them in the rescue operation. ODRAF team, fire services and local police are also carrying out rescue operation and providing relief materials to the flood-affected people of the district.

2018-09-21
Editor in chief
Previous: OdishaChief Minister announced that AR Rahman and lyricist Gulzar will collaborate for the official song of the Odisha Hockey Men’s World Cup
Next: Amicus curiae Gopal Subramanium will consider the suggestions given by Puri Shankaracharya on Sri Mandir reforms.