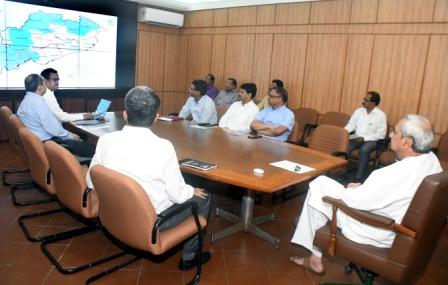 in State News September 20, 2018 Comments Off on Odisha Chief Minister review meeting at the secretariat in the wake of possible cyclone 1,202 Views

Bhubaneswar:20/9/18: Chief Minister Naveen Patnaik held a review meeting at the secretariat here on Thursday in the wake of possible cyclone alert in Odisha and asked officials to keep a close eye on the situation.

Patnaik directed officials to take all possible measures to ensure that no life is lost in the possible cyclonic storm. He also asked officials to keep ready adequate relief materials for people likely to be affected in the cyclone.

Earlier, Chief Secretary Aditya Prasad Padhi, while reviewing the cyclone preparedness, asked the district collectors and field functionaries to remain alert to tackle any eventuality. He also appealed to people not to panic as the intensity of the cyclone is likely to be low.

Padhi directed collectors and field functionaries to cancel leaves in the districts likely to be affected by the cyclone. During the meeting, special relief commissioner (SRC) Bishnupada Sethi outlined the impact of the possible flood and preparations to tackle it.

Padhi directed officials to identify villages/habitations likely to be inundated and arrange the evacuation of the vulnerable population from low-lying areas.Holidays on September 21 (Friday) is cancelled in Gajapti, Ganjam, Khurda, Nayagarh and Puri districts. Collectors of other districts may cancel the holidays on September 21 for the employees of the affected blocks/ districts as per requirement after due assessment of the situation, the Chief Secretary said.

2018-09-20
Editor in chief
Previous: Odisha Director General of Police reviewed the security arrangements for the scheduled visit of Prime Minister
Next: Union Minister Dharmendra Pradhan hinted at a ‘viable alternative’ to BJD and Congress