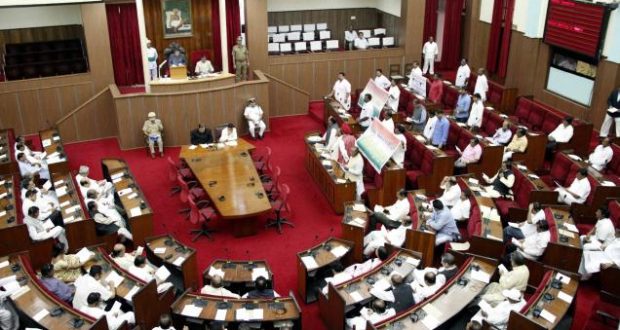 Odisha Assembly: Speaker calls for all party meeting In the wake of the derogatory remarks tweeted by Abhijit Iyer Mitra

in State News September 20, 2018 Comments Off on Odisha Assembly: Speaker calls for all party meeting In the wake of the derogatory remarks tweeted by Abhijit Iyer Mitra 853 Views

Bhubaneswar:20/9/18: In the wake of the derogatory remarks tweeted by Baijayant Panda’s friend Abhijit Iyer Mitra on the dignity of Odisha and its presiding deity Lord Jagannath, his arrest rocked the last day of the monsoon session of Odisha Assembly today.

As soon as the house assembled for the day, Leader of Opposition (LoP) Narasingha Mishra moved a privilege motion against Abhijit Iyer Mitra over his alleged comments against Odisha MLAs.

Mishra said, “Remarks of Abhijit Iyer Mitra have disrespected people of Odisha and Odia language. He should be summoned to the State and the House should decide on quantum of punishment”

Congress chief whip Tara Prasad Bahinipati also demanded stringent punishment against him. He said that they would not leave House till announcement is made on this.

Meanwhile, BJP leader Pradip Purohit slamed Chief Minister Naveen Patnaik for his absence during a discussion on privilege motion in on remarks of Iyer.

After hearing to the House members the Speaker called for all-party meeting after adjourning House for 20 minutes.

2018-09-20
Editor in chief
Previous: Bhubaneswar:19/9/18:Chief Minister Shri Naveen Patnaik interacted with Mission Shakti Odisha Women Self-Help Group of Sundargarh district and praised their efforts through the program to promote financial independence among women, empowering them to lead.
Next: Depression over Bay of Bengal is likely to trigger heavy rainfall across Odisha