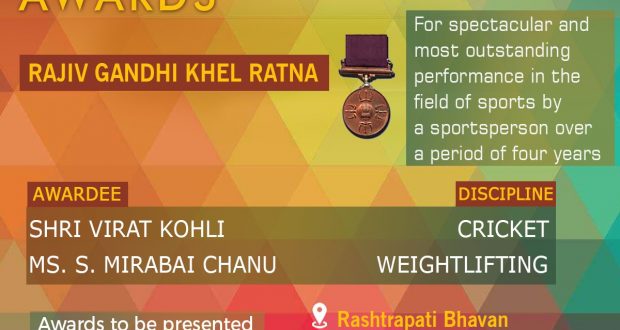 Newdelhi:20/9/18:National Sports Awards are given every year to recognize and reward excellence in sports. Rajiv Gandhi Khel Ratna Award is given for the spectacular and most outstanding performance in the field of sports by a sportsperson over a period of four year, Arjuna Award is given for consistency outstanding performance for four years, Dronacharya Award for coaches for producing medal winners at prestigious International sports events, Dhyan Chand Award for life time contribution to sports development and Rashtriya Khel Protsahan Puruskar  is given to the corporate entities (both in private and public sector) and individuals who have played a visible role in the area of sports promotion and development. Overall top performing university in inter-university tournaments is given Maulana Abul Kalam Azad (MAKA) Trophy.

Based on the recommendations of the Committee and after due scrutiny, the Government has decided to confer awards upon the following sportspersons, coaches and entities:

The awardees will receive their awards from the President of India at a specially organized function at the Rashtrapati Bhawan on 25th September, 2018.

Apart from a medal and a citation, Rajiv Gandhi Khel Ratna Awardee will receive a cash prize of Rs. 7.5 lakh. Arjuna, Dronacharya and Dhyan Chand Awardees will receive statuettes, certificates and cash prize of Rs. 5 lakh each. A trophy and citation is given to the entity in the Rashtriya Khel Protsahan Puruskar, 2018. Recipients of Rashtriya Khel Protsahan Puruskar will be given Trophies and certificates. Overall top performing university in inter-university tournaments will be given MAKA Trophy, award money of Rs. 10 lakh and certificate.