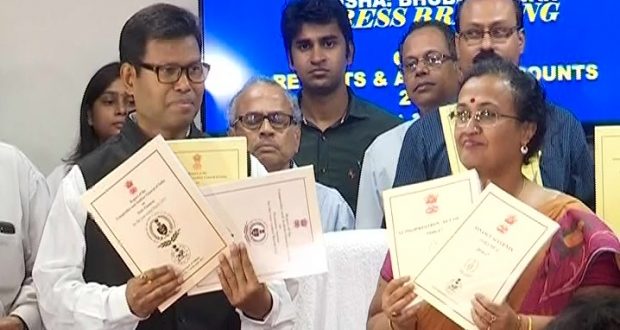 Bhubaneswar:20/9/18: The Comptroller and Auditor General of India (CAG) rapped the Odisha government for haphazard implementation of disaster mitigation proects.

Odisha Disaster Recovery Project (ODRP) was implemented with a project cost of ` 1,352 crore to rehabilitate persons affected in the cyclone Phailin and reconstruct damaged civil infrastructure.

For construction of saline embankments, soil was transported from borrow pits that were situated within 500 metres of the embankments. However, the contractors were paid considering distance of transportation as five kilometres, resulting in excess payment of ` 7.37 crore.

In construction of 46 approach roads and 45 MPCSs by the Rural Development Department, the Executive Engineers prepared estimates as per the State Analysis of Rate (SAR). The agreements executed with the contractors followed Indian Standard (IS) specifications, which provided for use of less quantity of cement. However, in execution of 99,802 cubic metre of reinforcement cement concrete works, quantity was calculated as per the SAR instead of IS, which led to excess payment of Rs 6.31 crores.

The recommendation of the Indian Institute of Technology, Kharagpur and National Disaster Management Authority guidelines prescribed circular/ hexagonal/ octagonal shaped buildings in order to improve the aerodynamics of the structure. In five sampled districts, all the 43 MPCSs were rectangular in shape. Also, the MPCSs were not equipped with essential equipment and electricity.

The State Level Project Steering Committee, headed by the Chief Secretary, under NCRMP had not conducted any meeting after November 2013. Thus, monitoring of implementation of the programme was inadequate.

Early Warning Dissemination System could not be made operational even after six years of commencement of the project. Multi Purpose Cyclone Shelters were not provided with essential equipment and electricity. Cases of excess payment and undue favour to contractors in construction of embankments were also observed. Monitoring was deficient, the audit report stated.