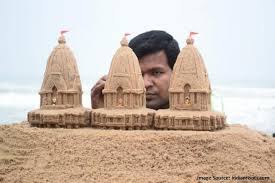 in State News September 19, 2018 Comments Off on Sudarshan Patnaik appointed as the president of Odisha Lalit Kala Akademi 1,318 Views

The post had remained vacant after famous sculptor and Padma Vibhushan recipient Raghunath Mohapatra resigned following his nomination to Rajya Sabha by the President.

The world-renowned sand artist has participated in more than 50 international sand art championships and festivals around the world and won several prizes.

Patnaik was honoured with Padma Shri, the fourth highest civilian award in India, in 2014. He has also bagged various national awards like National Youth award, National Tourism award, People of the Year award by Limca Book in 2009 and Young Indian Leadership award by CNN IBN.

Apart from these, he is actively involved in creating social awareness in the national and international arena on world peace, global warming, terrorism, HIV AIDS, and protection of endangered wildlife species through his sand art.After his new assignment Pattnaik tweet that:

I am grateful to Hon’ble Chief Minister @Naveen_Odisha for giving me the opportunity to serve as President of Odisha Lalit Kala Akademi. I seek blessings of Lord Jagannath to work hard with team to take the Akademi to a respectful level. Thanks to all my well wishers.

2018-09-19
Editor in chief
Previous: Modi government treat triple talaq “more as a political football than a matter of justice:Congress
Next: Three odia players have been named for the upcoming 8th Sultan of Johor Cup