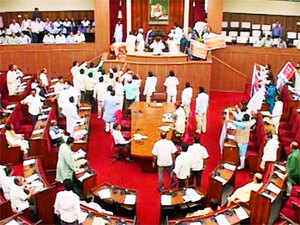 Unable to run the proceedings, the Speaker adjourned the House till 11.30 am.

Speaker Pradip Kumar Amat was forced to adjourn the Odisha Assembly on Tuesday due to uproar by the Opposition Congress and the BJP members over the Cooperative Bank Loan scam and the ongoing strike by lawyers in Cuttack.

BJP members rushed to the well of the House and staged noisy protest seeking CBI probe into the Cooperative Bank Loan scam. They sought for clarification in this regard by the chief minister Naveen Patnaik.

The Congress members blamed the state government for not intervening in the ongoing agitation by lawyers of the Cuttack Bar Association. The case involving the assault of a lawyer by policemen was dealt indifferently by the government, they alleged.