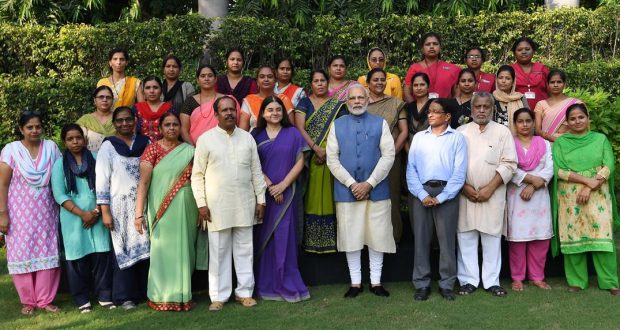 Anganwadi workers from across the country call on PM

The Prime Minister emphasized the importance of nutrition in a child’s physical and cognitive development. He said the Anganwadi workers have a key role to play in this regard. Referring to the ongoing Poshan Maah (nutrition month), the Prime Minister said that the momentum that has been built up during this campaign should not flag. He said nutrition requires constant focus and development of good habits, which can be provided by Anganwadi workers. He exhorted them to ensure that the nutritional assistance being made available to beneficiaries is used judiciously.

Children will listen more to Anganwadi workers. They have a key role in generating awareness. He encouraged healthy competition among Anganwadis, as a motivation for better nutritional care and efforts among various Anganwadi workers.

Union Minister for Women and Child Development, Smt. Maneka Gandhi was also present on the occasion.