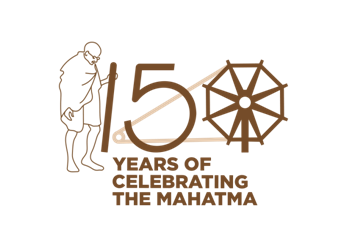 in National September 18, 2018 Comments Off on President of India launches the logo and web portal for commemoration of 150th birth anniversary of Mahatma Gandhi 1,610 Views

Newdelhi:18/9/18:The President of India, Shri Ram Nath Kovind launched the logo and the web portal (http://gandhi.gov.in/) for commemoration of 150th birth anniversary of Father of the Nation, Mahatma Gandhi, at Rashtrapati Bhawan today. The logo was released in the presence of Minister of State for Culture (Independent Charge) and Environment, Forest & Climate Change, Dr. Mahesh Sharma and Secretary Culture, Shri Arun Goel. 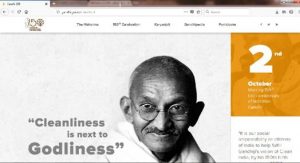 The designs of the logo with colour guide are available on the web-site of https://gandhi.gov.in/download.html for download:-

The salient features of the new web portal are:

The webportal is participatory in nature and all the participating organizations will be able to upload their activities regarding commemoration on the website. It also has a unique feature Gandhipedia which will be a repository of Gandhian knowledge and will continue to grow with time.

The two year long celebrations from 2nd October, 2018 to 02nd October, 2020 will be held across the country and all over the globe to mark the 150th birth anniversary of Mahatma Gandhi. A meeting of National Committee headed by the President of India was held in May, 2018 to draw out a plan of action for the mega celebration where a total of 92 suggestions were received. Further, a total of 33 suggestions were approved by the Executive Committee headed by the Prime Minister to organize nationwide and worldwide commemoration. Accordingly, all Ministries/Departments of the Government of India and all State/UT Governments have initiated actions pertaining to their Ministries/Departments.  These action plans are being uploaded on the web portal.