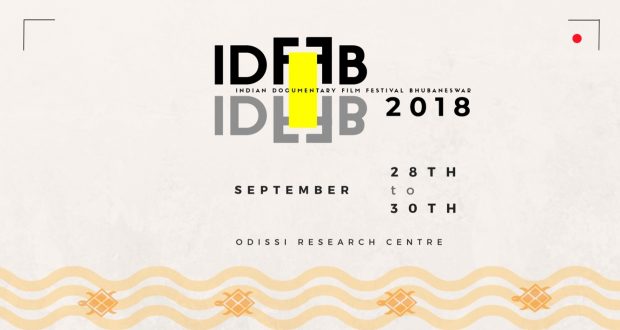 Bhubaneswar:18/9/`18:IDFFB 2018 is a three days long film festival screening  acclaimed documentary works from across the subcontinent, the focus being to showcase unseen stories from across the regions to our viewers. The organizing team is Film Society of Bhubaneswar (FSB) which has curated films of artistic merit, in association with Vikalp, India Foundation of the Arts (IFA) and Kerala Chalachitra Academy. Film Society of Bhubaneswar has been screening the finest of world cinema since the last 15 years to help the people of Bhubaneswar discover rare and forgotten films which remain unappreciated and unexplored in the popular media. Our previous film festivals have been retrospectives of auteur filmmakers or focused on regional cinema, and this time we have decided to expand our efforts to cover and emphasize on non-fiction films.This  festival is scheduled to be commenced from 28th-30th September 2018 at 11am to 9pm at  Odissi Research Centre Audotorium,Bhubaneswar.

Apart from the film screenings, there will be art installations, movie quizzes, music events and writing competitions, poetry and literary readings for students to come and explore cinema from different dimensions.  Since film society is striving to create safe spaces of discussions and conversation in the state, there will be daily panel discussions with film critics, directors and actors regarding the relevance and power of the medium of documentary films in today’s world.

There will be masterclasses on film direction, script writing and film appreciation conducted by our special guests Qaushiq Mukherjee and Kamal Swaroop.

The films have been handpicked from across genres of visual arts and performing arts, music, politics, labor, cultural activism, love and sexuality, gender and much more. Ten out of the twenty films are directed by female filmmakers, in order to challenge the general misconception about the dearth of artistic films made by women in the Indian subcontinent.

2018-09-18
Editor in chief
Previous: Odisha government approved seven investment proposals worth Rs 7,416 crore
Next: Anganwadi workers from across the country call on PM