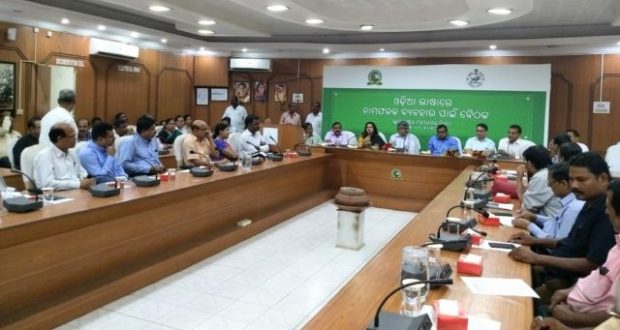 Institutions urged to use Odia prominently on signbard across Bhubaneswar

Bhubaneswar:15/9/18: In order to expedite the use of Odia language by institutions, commercial establishments and shops in the city, a meeting under the chairmanship of Development Commissioner R. Balakrishnan was held at BMC Corporation Hall this afternoon. Most of the participants on their own declared that their signages would be changed accordingly by October 15.

Speaking about the pride of using mother tongue by local people, the Development Commissioner also stressed use of Odia language in all its aspects and ventures through the entire Smart City Project. “We have achieved the Smart City tag through a competition, now by using our own language we can be the “smartest city,” he observed.

Principal Secretary Labour Anu Garg said “now the use of Odia language on signage would be on voluntary basis, but after certain deadline enforcement might be imposed on violators to adhere to a uniform code of conduct. A website would also be in place through which citizens can post their photos citing violators.”

Director Odia Bhasa Pratisthan Tamasarani Dasmohapatra came forward with a proposal of creation of a dictionary of administrative words in Odia and the citizens could take the help of the institute to have correct Odia words on their signage.

After October 15 there would be another meeting at BMC so that progress on the use of Odia language in signage across the city could be assessed.