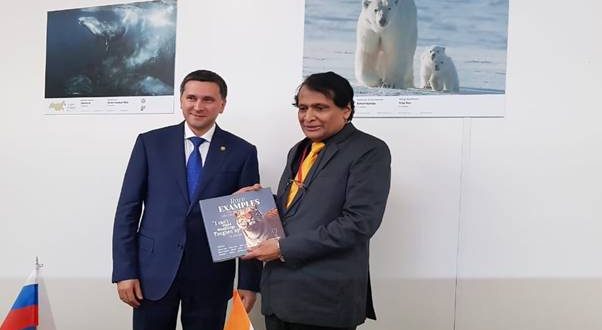 in International September 12, 2018 Comments Off on Suresh Prabhu holds meetings with Russian Ministers at Vladivostok 883 Views

Vladivostok:12/9/18:Union Minister of Commerce & Industry and Civil Aviation, Suresh Prabhu, had a meeting with Dmitry Kobylkin, Minister of Natural Resources and Environment of Russian Federation. Both sides discussed issues of mutual cooperation in areas of common concern like conservation of environment, saving the tiger, water cooperation and environmental sustainability. Suresh Prabhu is in Vladivostok, Russia, to attend the Far Eastern Economic Forum being held from 11th – 13th September 2018.

During the meeting with the Deputy Prime Minister of Russia, Yury Trutnev, the Commerce Minister discussed issues of mutual cooperation in sectors like mining and geological exploration in gold and diamond, water cooperation, forestry, timber and agriculture.

Suresh Prabhu met with the Governors, Vice Governors and representatives of regions of the Far-East: Primorye, Yakutia, Sakhalin, Amur, Magadan, Kamchatka, and Khabarovsk. Discussions were held on possibilities of mutual co-operation in sectors like mining, agriculture and tourism. Possibilities of co-operation between India’s states and Russia’s regions were also discussed. The Commerce Minister invited Regional Governors of the Far East to visit India with business delegations in order to explore areas of co-operation.

The Commerce Minister also participated in a session on “Timber in the Far East-Increasing Industry’s Economic Return”. He spoke about strengthening economic ties and forging new partnerships between India and Russia at a reception organized by “Delovaya Russia” (Business Russia).

New initiatives from the Russian Federation and changing neighbourhood dynamics have increased the need for India to evaluate the opportunities available in the Far East of Russia.

India was the first country to establish a resident consulate in Vladivostok in 1992. However, India’s existing engagement with the region is limited to isolated pockets. In order to bolster the trade ties it is imperative that connectivity between India and Vladivostok have to be simplified, affordable and time efficient. Ease of connectivity will not only provide access to the resource rich, unexplored Far East but will also strengthen India’s geo-political stature.