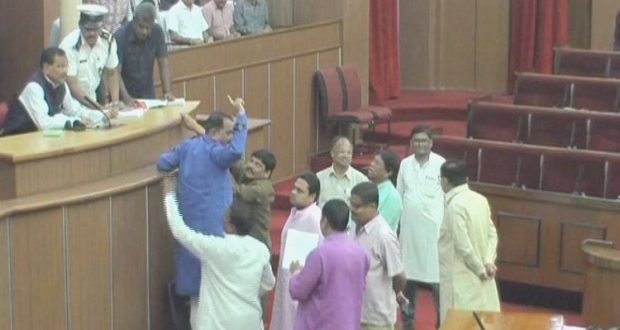 Bhubaneswar: 12/9/18:The Question Hour in Odisha Assembly was washed out for the sixth consecutive day today amid a ruckus by members of the opposition parties, who demanded a clarification from Chief Minister Naveen Patnaik over the recent scams including the Omfed and Sapling scams.

The House was adjourned twice in the pre-lunch session as members tried to climb Speaker P K Amat’s podium, seeking action against defaulters.

As soon as the House assembled for the Question Hour, the opposition MLAs trooped into the Well, raising slogans against the ruling BJD.

The Congress legislators raked up the alleged sapling scam and sought to know the names of people involved in it.

“The Agriculture Minister has already acknowledged irregularities in sapling plantation project. He should now reveal the names of persons involved in corruption,” party’s chief whip Taraprasad Bahinipati told reporters outside the Assembly.

Speaking to media persons, Leader of Opposition, Narasingha Mishra said, “The Agriculture Minister has accepted corrupt practices in the department. The house wants to know what action and remedial steps have been taken in this regard.”

“We want the CBI to probe into cooperative bank scam. Also, no action has been taken against those involved in sapling scam. The chief minister should clear his stance on these issues,” BJP MLA Rabi Naik said.

2018-09-12
Editor in chief
Previous: Shree Jagannath Temple Administration has decided to introduce ‘Thali System’ in Ananda Bazaar
Next: Biju Patnaik Himalayan Expedition which will be flagged-off on September 17