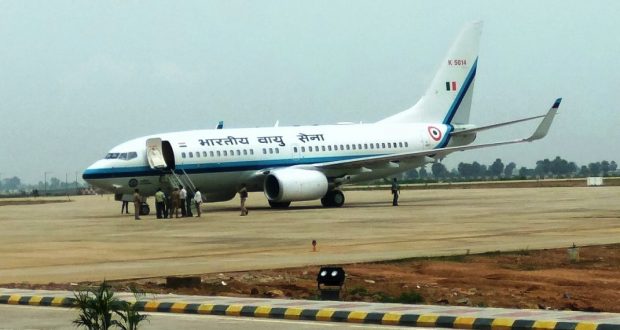 Jharsuguda:12/9/18: A Boeing-737 flight of the Indian Air Force made its first trial landing at the Jharsuguda airport Tuesday ahead of Prime Minister Narendra Modi’s proposed visit to the place for its inauguration.

The Prime Minister is scheduled to visit Jharsuguda September 22 to inaugurate the airport. This has charged up the atmosphere here as the administration was found on its toes making all arrangements for the PM’s visit.

The business class Boeing-737 flight made its first trial landing at 1 pm at the airport. Airport sources said one or more landings might take place before September 22.

The officials boarding the flight got down at the airport and reviewed the infrastructural provisions at the airport for about half an hour, it was learnt. Later, the flight took off for its destination at 1.40 pm, airport director SK Chouhan said. The landing was quite successful without any glitch, he added.

2018-09-12
Editor in chief
Previous: Ama Gaon Ama Bikash session has covered 4,373 GPs in 200 blocks and led to sanction of 309,975 projects
Next: Mattress seller Kurl-On is planning to commission the first phase of its second plant in Bhubaneswar