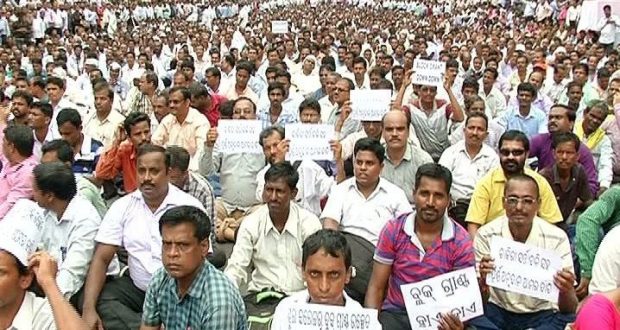 Bhubaneswar:12/9/18: An inter-ministerial committee meeting held today to address the issues of agitating teachers ended inconclusively following which the protestors said that they will intensify their agitation and threatened to resign en masse.

According to sources, while the State government sought 3 months time to resolve the issue, the agitating teachers said they want a solution within a week to which the former did not agree.

“The State government wanted 3 months time but we asked them to resolve it in 7 days. This is a clever attempt to set aside the issue. If required we will submit our resignations but we will not call off the agitation,” Convener of All Odisha School College Teachers and Employees’ United Forum, Golak Nayak said.

Another convenor of the Forum Pabitra Mahala said “It seems that just because the matter was raised in the State Assembly, the government agreed to hold talks. In future they will be bound to fulfil our demands.”

The School & Mass Education Minister said “We have told them that the issue can be resolved with talks but it is not possible to find a solution in 7 days.”

The agitating teachers yesterday vowed to spread their voices from Lower PMG in Bhubaneswar to all the 314 blocks of Odisha and threatened to intensify their stir by taking out ‘padyatra’ in all the panchayats.

2018-09-12
Editor in chief
Previous: Biju Patnaik Himalayan Expedition which will be flagged-off on September 17
Next: Union Law Minister asked Naveen Patnaik to discuss the about issue with the Chief Justice of the Orissa High Court.