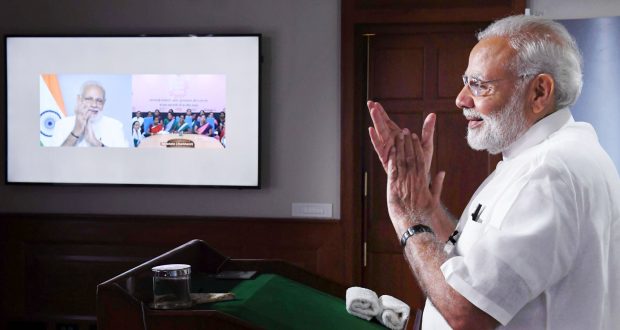 The Prime Minister, Shri Narendra Modi interacting with the ASHA, Anganwadi and ANM workers from all over the country through video conference, in New Delhi on September 11, 2018.

PM announces increase in remuneration for ASHA and Anganwadi workers

in National September 11, 2018 Comments Off on PM announces increase in remuneration for ASHA and Anganwadi workers 691 Views

Newdelhi:11/9/18:The Prime Minister, Shri Narendra Modi, today announced a landmark increase in remuneration for ASHA and Anganwadi workers. The announcement which will be effective from next month was made during a video bridge interaction with lakhs of ASHA, Anganwadi and ANM workers today.
The Prime Minister announced the doubling of routine incentives given by the Union Government to ASHA workers. In addition, all ASHA workers and their helperswould be provided free insurance cover under Pradhan Mantri Jeevan Jyoti Bima Yojana and Prime Minister Suraksha Bima Yojana.

Prime Minister also announced that Anganwadi workers and helpers using techniques such as Common Application Software (ICDS-CAS), would get additional incentives. The incentives ranging from Rs. 250 to Rs. 500, would be based on performance.

The Prime Minister interacted with teams of three As – the ASHA worker, Anganwadi worker and ANM (Auxiliary Nurse Midwife) from across the country. He appreciated their efforts to work together, to use innovative means and technology, to improve the delivery of health and nutrition services and achieve the goal of the POSHAN Abhiyan – reduction of malnutrition in the country.

2018-09-11
Editor in chief
Previous: Central government has cancelled the proposal for a water aerodrome project at the Chilika Lake
Next: Apsara – U Reactor Becomes Operational at Bhabha Atomic Research Centre, Trombay