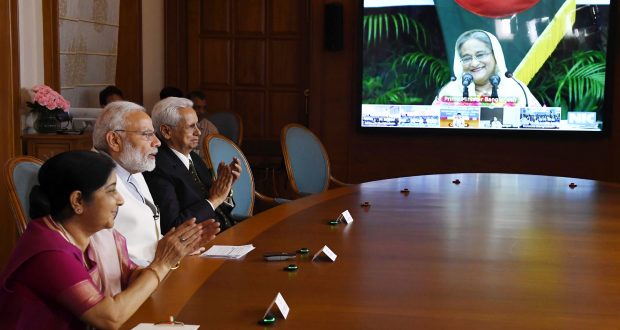 These include: (a) 500 MW additional power supply from India to Bangladesh, through the existing Bheramara (Bangladesh) – Baharampur (India) interconnection. (b) Akhaura – Agartala Rail Link (c) Rehabilitation of the Kulaura-Shahbazpur section of Bangladesh Railways.

Speaking on the occasion, the Prime Minister began by recalling that he had met Bangladesh Prime Minister Sheikh Hasina several times in the recent past, including at the BIMSTEC meeting in Kathmandu, in Shanti Niketan, and during the Commonwealth Summit in London.

He reiterated his view that leaders of neighbouring countries should have a relationship like neighbours, talking and visiting frequently, without getting bogged down by protocol. He said this closeness is evident in the frequent interactions between him and the Bangladesh Prime Minister.

Prime Minister Modi recalled Bangladesh PM Sheikh Hasina’s vision of restoring connectivity to the way it was before 1965. He said that he is happy that in the last few years, there has been steady progress towards this goal. He said that today, we have increased our power connectivity, and started two projects to increase our railway connectivity. He recalled that during his visit to Bangladesh in 2015, it had been decided to supply an additional 500 MW power to Bangladesh. He said this is being done using the transmission link between West Bengal and Bangladesh, and thanked the Chief Minister of West Bengal, Ms. Mamata Banerjee for her facilitation in completion of this work. He said that with the completion of this project, 1.16 Gigawatts of power is now being supplied from India to Bangladesh. He said this journey from Megawatts to Gigawatts is symbolic of a golden era in the relations between India and Bangladesh.

The Prime Minister said that Akhaura-Agartala rail connectivity will provide another link in the cross-border connectivity between the two countries. He thanked the Chief Minister of Tripura, Shri Biplab Kumar Deb, for his facilitation in completion of this work.

Prime Minister Modi appreciated Prime Minister Sheikh Hasina’s development goals of transforming Bangladesh into a middle income country by 2021, and a developed country by 2041. He said that closer relations and people to people links between the two countries would take our development and prosperity to new heights.B