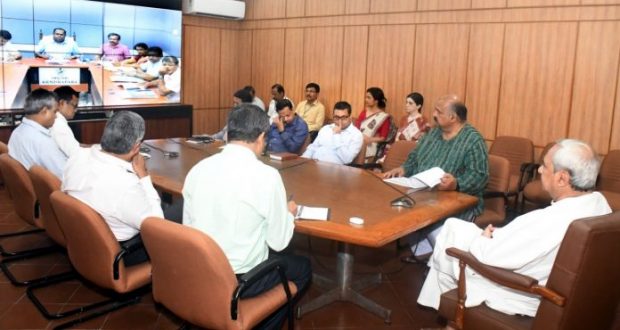 Bhubaneswar:10/9/18: Chief Minister Naveen Patnaik on Monday announced relief for the people in the three flood-affected districts of Odisha for seven days.

Presiding over a high-level review meeting on the flood situation at the State Secretariat here, the Chief Minister directed the departments concerned to provide Rs 60 and Rs 45 daily as relief to the middle-aged persons and children below 12 years respectively in the flood-hit districts for seven days.

Besides, he also directed the Agriculture and Animal Resources Development department to provide free treatment and immunisation of the domestic animals in these areas.

The Chief Minister directed the collectors of the flood-affected districts to submit a detailed report on the damage caused by the flood, within a week.

Present at the meeting, Special Relief Commissioner (SRC) Bishnupada Sethi said about 7.5 lakh people of 17 blocks and four urban local bodies (ULBs) of Bhadrak, Jajpur and Kendrapara districts have been affected by the flood.