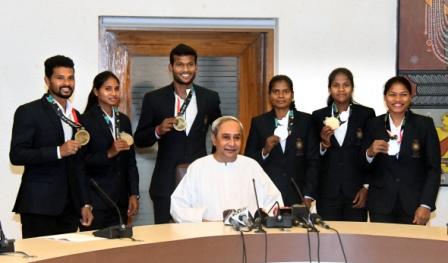 Bhubaneswar:10/9/18: Chief Minister on Monday felicitated four Odia girls in the national women’s hockey team and two in the men’s hockey team for their success in the recently concluded 18th Asian Games in Jakarta of Indonesia.

On the occasion, Patnaik congratulated the hockey players for their remarkable success in the Asian Games and said they have made India as well as Odisha proud. The CM promised that the state government would provide necessary help to them in future.

Similarly, Odia men’s hockey players- Birendra Lakra and Amit Rohidas received Rs 50 lakh each in recognition of their achievement in the Asian Games.