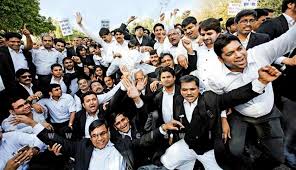 Bhubaneswar:9/9/18:About 120 of the 167 bar associations in the State on Saturday decided here unanimously that the lawyers across the State would cease work and boycott all tribunals and courts, including the Orissa High Court, till Wednesday next for what they called the “indifferent attitude of the State Government in upholding the dignity of the lawyers”.

The decision was taken after a marathon meeting held at Orissa High Court Bar Association office attended by representatives of all bars of the State, informed HC Bar Association secretary Satyabrata Mohanty.

Notably, the lawyers of Cuttack have been agitating since August 29 protesting against the August 28 police assault on a city lawyer, whose car was involved in a series of road accidents.

Even as the Commissionerate police have placed three policemen under suspension for “misconduct” and the Crime Branch police, upon directions from the High Court, are now investigating into at least four cases registered in connection with the August 28 incident, the lawyers are demanding arrest of the erring policemen. Mohanty also stated that the lawyers have formed an Action Committee, which would meet the Chief Minister and the Law Minister very soon to apprise them about the grievances of the lawyers. The Action Committee will meet on Wednesday afternoon to decide on the next course of action, he informed.

2018-09-09
Editor in chief
Previous: All schools in the State would remain closed on Monday
Next: Music VCD of odia film Krishna – Story of a Dancer Unveiled