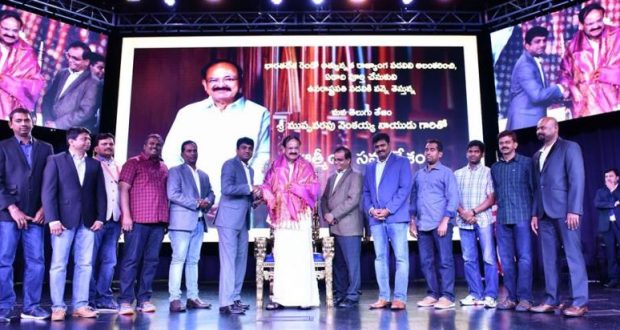 Indians in USA should not forget their spiritual and cultural roots: Vice President

The Vice President of India, Shri M. Venkaiah Naidu has advised the Indian diaspora not to forget their spiritual and cultural roots and contribute their mite towards building a new and resurgent India. He was addressing the members of 21 Telugu Associations based in USA, in Chicago, USA today. The Ambassador of India to USA, Shri Navtej Sarna and other dignitaries were present on the occasion.

The Vice President asked them to uphold India’s core values and beliefs of sharing, caring and treating the entire world as ‘One Family’ – Vasudhaiva Kutumbakam. Pointing out that India is the spiritual capital of the world, he said India was one of the oldest surviving civilizations and recalled the invaluable contribution made by Indians over the centuries in different fields from zero to Yoga.

The Vice President said that never forget or neglect your mother tongue, native village, motherland, parents and the Guru, who is responsible for your success, he told them. Those who want to move ahead in life should never forget their past, he added.

While complimenting the Telugu community for their contribution to the progress of America, the Vice President observed that it was a matter of pride that many Telugus are occupying high positions in different fields.

While accepting and assimilating the best practices from elsewhere in the world, he asked them to always remain rooted to India’s rich cultural heritage and traditions. We need to celebrate our festivals and uphold our customs, he said. At the same time, the Telugus and other Indians in the USA served as a bridge in strengthening the ties between India and America. People-to-people contacts were essential to strengthen the bonds of friendship, he added.

Referring to India’s emergence as the fastest growing economy, he said the world was looking towards India which is moving on the trajectory to become one of the top global economies in the next 10-15 years. “I would like all of you to join in fast-tracking India’s growth story,” he said.

Observing that about 32 million Indians and Persons of Indian Origin were living across the globe, he told the overseas Telugus to always strive to enhance the image of India and Indians. He also appealed to them to adopt villages in their native districts and help in developing them into model villages.