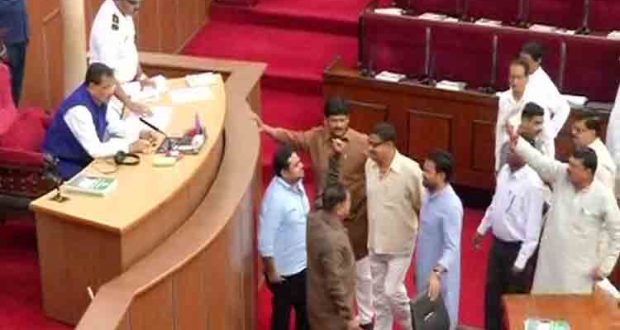 in State News September 7, 2018 Comments Off on Odisha Assembly passed a resolution for setting up a Legislative Council in the state 642 Views

Bhubaneswar7/9/18::Amid walk out by opposition Congress and BJP members, Odisha Assembly Thursday passed a resolution for setting up a Legislative Council in the state.

Speaker P K Amat announced that the resolution was passed as it got support of 104 of the 147 members of the Assembly while opposition Congress and BJP stayed away from the House.

Before going to vote, the Speaker sent two ministers – Prafulla Samal and Ananta Das – to request opposition members to return to the House and participate in the voting. As they turned down the request, a voting was conducted.

After casting the first vote in favour of the proposed legislative council, Chief Minister Naveen Patnaik said: “Odisha has picked up growth momentum and to further accelerate growth, wider consultations are necessary. In this context legislative council will be of great help.”

However, the opposition called the state government’s move for establishment of a Legislative Council, had intention to “rehabilitate” the ruling BJD leaders. They walked out of the House in protest.

The opposition alleged that the council formation has no meaningful use to the people of Odisha as it will only solve the political agenda of the ruling party.

BJP legislature party leader K V Singhdeo also criticised the state government’s resolution and said there was no need to set up a legislative council in Odisha keeping the state’s population in mind.

Even big states like Madhya Pradesh has no such legislative council, he said and agreed to the Congress’s view that it (council) would be used as a rehabilitation centre by the ruling party.

Arukha said the council will help in conducting more discussion on important issues and serving the people of the state. He said seven states like Andhra Pradesh, Telengana, Bihar, Jammu and Kashmir, Karnataka, Maharastra and Uttar Pradesh have legislative councils along with legislative assemblies.

The Minister said the proposed council will have 49 members and one-third (16) of the council will be elected by the states MLAs, another 1/3rd (16) by sitting members of local governments such as municipalities and Zilla Parishads, 1/12th (4) by an electorate of teachers and another 1/12th (4) by registered graduates.

2018-09-07
Editor in chief
Previous: Jharsuguda airport is getting ready for takeoff
Next: Congress called for a ‘Bharat bandh’ on September 10 Protest on rise in diesel and petrol prices