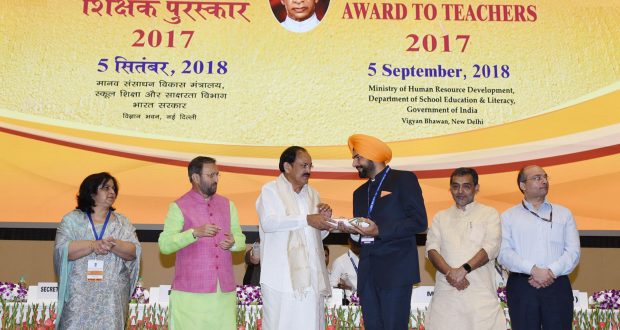 Newdelhi:5/9/18:The Vice President of India, Shri M. Venkaiah Naidu has said that Teachers are the key Architects of National Development and the basic education must be in mother tongue. He was addressing the gathering after presenting the Presents National Awards to Teachers 2017 on the occasion of Teachers Day, here today. The Union Minister for Human Resource Development, Shri Prakash Javadekar, the Minister of State for Human Resource Development, Shri Upendra Kushwaha and other dignitaries were present on the occasion.

The Vice President said that the societal mind set and attitude must change. He further said that we have to create an ethos that values learning, an ethos that gives respect to teachers. It has been said that “values are caught and  that they can rarely be taught” which means the teachers must ensure through their behaviour, through their communication with students and in the way the classes are organised that values of equality, democracy, peace and  working together become an integral part of the school ethos, he added.

The Vice President said that in international studies of effective schooling, it has been found that an important contributory factor for creating high performing systems, like in countries like Finland for instance, is the respect that the society accords to its teachers. He further said that all these principles emanate from our ancient Indian heritage which views education as integrated development of all faculties. As Swami Vivekananda said, “We want that education by which character is formed, strength of mind is increased, the intellect is expanded and by which one can stand on one’s own feet”, he added.

The Vice President presented National Awards for Teachers 2017 to 45 teachers selected from all over the country.