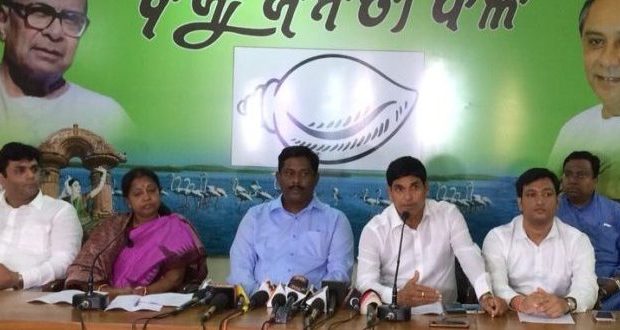 in State News September 4, 2018 Comments Off on Biju Janta Dal will launch a three-day long protest from September 7 to 9 against the hike in fuel prices 755 Views

Bhubaneswar:4/ 9/18:The Biju Janta Dal (BJD) on Tuesday said that the ruling party will launch a three-day long protest from September 7 to 9 against the hike in fuel prices across the state.

Activists of Biju Mahila Dal, Biju Yuva Janata Dal, and Biju Chatra Janata Dal will protest at various places in Odisha. The three days long strike is in a phased manner from 10 am to 12 noon, the BJD said in a press meet.

During this strike, BJD activists will protest at various petrol pumps and organise awareness programmes regarding the increasing fuel prices.

The BJD has been demanding the central government to include the fuel under Goods and Service Tax (GST). The BJD blamed the central ruling party BJP for the drastic hike in the price.

The BJD activists also accused, Union Petroleum Minister, Dharmendra Pradhan for failing to address the matter of the increase in the fuel prices.

On the other hand, BJP spokesperson Golak Mahapatra today said that “the rise in price depends on the state of Indian currency in the international market. The fuel price in the state can also be controlled if the State government reduces the tax, added the BJP spokesperson.

Notably, fuel prices in the country touched the highest levels on Tuesday by continuing the record-breaking run for the 10th day.  The current price of petrol in the state capital, Bhubaneswar is Rs 78.18, whereas the price of petrol has reached Rs 81.15 in Nabarangpur and Rs 78.39 in Balasore.