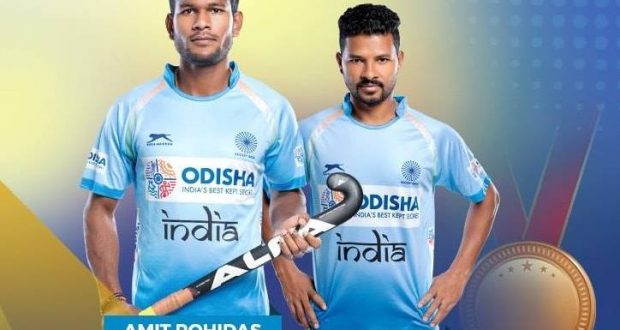 Bhubaneswar:3/9/18: Chief Minister Naveen Patnaik on Monday announced a cash prize of Rs 50 lakh each for the two players from Odisha, Birendra Lakra and Amit Rohidas, in the Indian Men’s Hockey team.

Notably, the Indian men’s hockey team beat Pakistan by 2-1 in the bronze medal match on the final day of 18th Asian Games at Jakarta on Saturday. Lakra and Rohidas were defenders in the team.

Lakra was one of the 18-member Indian Men’s team took part in the final edition of the prestigious Rabobank Men’s Hockey Champions Trophy in Breda, Netherlands in June 2018. Besides, he also represented India in Men’s Hockey during the 2012 London Olympics.

Amit Rohidas was selected in the national junior team in 2009 and got entry into the senior squad for 2013 Asia Cup in Ipoh where Indian team bagged silver. He has also been named in the 18-member men’s hockey squad to represent India in the Gold Coast 2018 XXI Commonwealth Games.

It may me mentioned here that the Chief Minister has already presented sprinter Dutee Chand with Rs 3 crore for winning two silver medals in the Asiad.