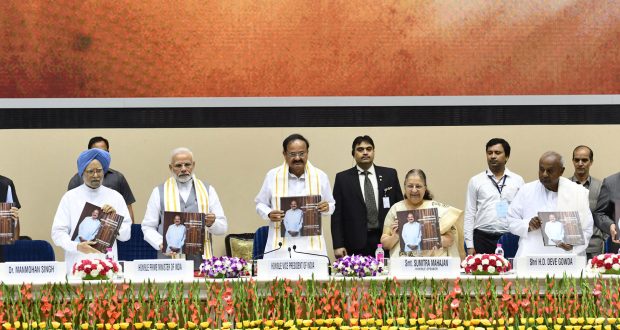 The Vice President, Shri M. Venkaiah Naidu, the Prime Minister, Shri Narendra Modi and other dignitaries at the release of Book MOVING ON MOVING FORWARD- A YEAR IN OFFICE, published on the completion of One Year in the Office of Vice President Secretariat, in New Delhi on September 02, 2018.

Newdelhi:2/9/18:The Prime Minister, Shri Narendra Modi, today released the book “Moving On, Moving Forward – A Year in Office” to mark one year in office of Vice President Venkaiah Naidu. He also presented the first copy of the book to the Vice President of India.

Speaking on the occasion, the Prime Minister said that he had the opportunity to work with Shri Venkaiah Naidu for several years. He said that Shri Naidu laid emphasis on responsibility (Karyabhaar), above all else.

The Prime Minister said that Shri Venkaiah Naidu always performed whatever duty he had, with utmost diligence, and adapted into that role with ease. He has been in public life for 50 years- 10 years in student politics and 40 years in state as well as national politics, the Prime Minister added.

Shri Narendra Modi said that Shri Venkaiah Naidu has the ability to endear himself to people across all sections, while also being a disciplinarian.He provides visionary leadership whenever he gets a responsibility. He gets the best experts to ensure justice is done to the work assigned, the Prime Minister added.

The Prime Minister recalled that when former Prime Minister Shri Atal Bihari Vajpayee wanted to include Shri Venkaiah Naidu in his Cabinet, then Venkaiahji had requested for the Rural Development portfolio. Venkaiah Ji is a farmer at heart, and is passionate about the welfare of farmers and agriculture.

The Prime Minister said that the Pradhan Mantri Gram SadakYojana came into being due to the efforts of Shri Venkaiah Naidu. In a time when political discourse was centredaround train stoppages only, Naidu ji ensured that leaders began to think more about roads and other forms of connectivity, the Prime Minister added.

The Prime Minister praised the Vice President for his oratory and his way with words, be it English or Telugu. He said that it is commendable that the Vice President has presented a report card of sorts about his first year in office, containing the rich work he has done both inside and outside Parliament.