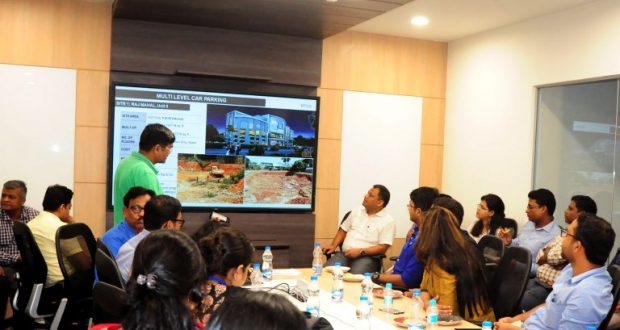 Bhubaneswar:2/9/18: In order to have a hands-on knowledge on the operations and utility of the command and control centre for the Smart City Project, 95 OAS probationers undergoing training at Gopabandhu Academy of Administration visited the Bhubaneswar Operations Centre (BOC) at Bhubaneswar Smart City Limited (BSCL) on Saturday.

Led by Joint Commissioner of Gopabandhu Academy of Administration Prafulla Swain, last evening, the probationers were delighted to see the state-of-the art facility, which would manage the city operations.

Notably, the first-of-its-kind centralised command and control centre to monitor, operate, and control existing services of the city, was inaugurated by Chief Minister Naveen Patnaik on July 9.

The Adaptive Traffic Signal System, tracking of buses and Bhubaneswar Municipal Corporation vehicles along with Grievance Redressal System is being operationalised at present from BOC.

General Manager (Operations) of BSCL Bijay Kumar Swain explained how the operations centre was envisaged to be developed further in a manner to keep an eye on several functions like traffic management, incident management, city surveillance, emergency services and disaster management.

The state-of-the-art centre includes a massive video wall of more than 80-foot length (with 16 x 2 configuration of 70 inch panels) and will be used to monitor the large volume of close circuit television (CCTV) footage and highly sophisticated sensor data.

2018-09-02
Editor in chief
Previous: PM addresses book release event to mark one year in office of Vice President Venkaiah Naidu
Next: Five persons including a woman died of asphyxiation inside a septic tank