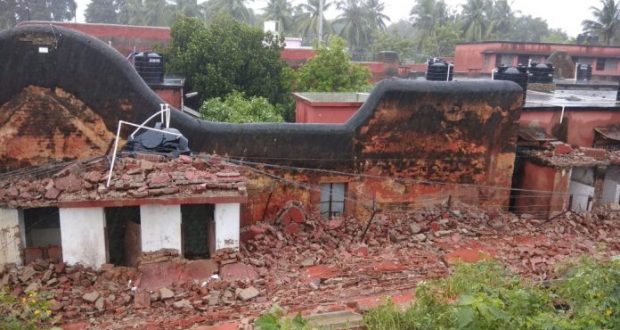 in District Diary September 1, 2018 Comments Off on Portion of compound wall of 106-year-old prison in Jajpur collapsed 782 Views

Jajpur:1/9/18: A portion of compound wall of 106-year-old prison in Jajpur district Headquarters Township caved in during wee hours on Saturday.

However the jail inmates and staffs escaped unhurt as they were in indoors because of torrential rain that lashed the region since yesterday night.

It was close shave for everybody. Anything could have happened. Some of the toilets within the jail campus suffered damage as debris of the wall came crashing on it, said the superintendent of the sub jail, laxmi Mukhi.

The jail was built in 1912 during the British Raj.

Measures are underway to rebuild the compound wall. Security has been stepped up in the jail. For the time being barbed wire fencing is being installed at the damaged portions of boundary, the official added.