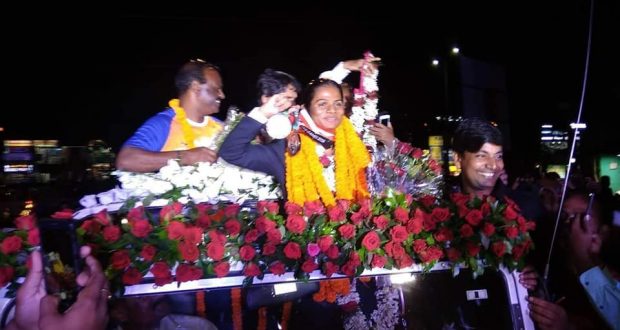 in State News September 1, 2018 Comments Off on Dutee Chand along with her her coach Ramesh Nagapuri hasreceived a rousing welcome 946 Views

Bhubaneswar:1/9/18:  An Eminient  sprinter Dutee Chand along with her her coach Ramesh Nagapuri has received a rousing welcome on her return to the state on 31 st,August,2018 after winning two silver medals at the 18th Asian Games. She has won silver medals in both 100m and 200m.

Hundreds of her fans, well-wishers, students and staff of KIIT and KISS Universities along with their founder Dr. Achyuta Samanta and other distinguished persons welcomed her on her arrival at Biju Patnaik International Airport here this evening. 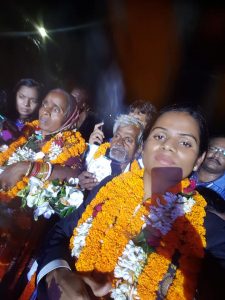 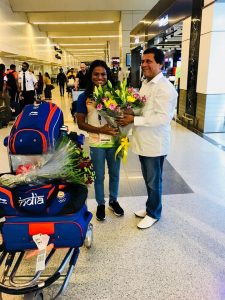 From there she went to meet Chief Minister Naveen Patnaik who felicitated her at the state secretariat. Besides, he handed over the cheque of the cash award of Rs 3 crore which he had announced for her after she won the medals. Patnaik also felicitated her coach Ramesh Nagapuri. After meeting the CM, the sprinter addressed the newsmen, in which she hailed Patnaik for his support. “Odisha Chief Minister Naveen Patnaik has supported me a lot. He is always lucky for me,” she said.

“I also thank everyone and grateful to KIIT & KISS founder Dr. Achyuta Samanta because he has been encouraging me a lot since he knew me,” she added.

Speaking about her future, Dutee said “Now my aim is to prepare myself for the next Olympic and bring a medal for the country.”

Later, KIIT and KISS students and staff felicitated her and her coach Ramesh Nagapuri.