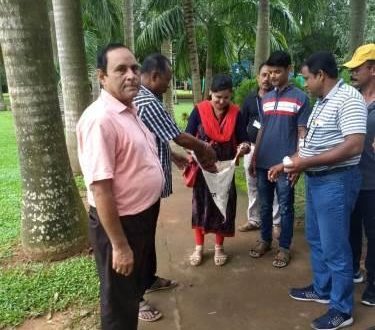 in Smartcity Bhubaneswar September 1, 2018 Comments Off on BDA organized an awareness drive among the office staff and the park goers about on plastic campaign 586 Views

Bhubaneswar:1/9/18: On its 36th Foundation Day, the Bhubaneswar Development Authority (BDA) on Saturday organized an awareness drive among the office staff and the park goers at Biju Patnaik Park about on plastic campaign.

Notably, the development authority had announced its plan to make its office and parks free from plastic from September 1.

During the Foundation Day meeting, paper-made files, folders were used at the Conference Room and the water bottles were replaced by glasses on the central table to start the initiative and start the “no plastic” slogan right from home.

Two squads of Enforcement Wing of BDA later went to Biju Patnaik Park and briefed the vendors near three entrances about the bad effects of plastic and polythene and use of alternate things like paper pouches and cotton bags.

Volunteers of city-based Save The Earth Foundation were also involved in the campaign as they provided the cotton bags. The enforcement team made a public announcement on the no plastic campaign of the development authority.

They convinced the park goers not to use the plastic bags and instead, use the cotton alternatives. More than 10 persons were given cotton bags by the team.

The development authority had earlier announced its plan to make its office and parks free from plastic from September 1 and accordingly, the awareness initiative was launched among the staff.