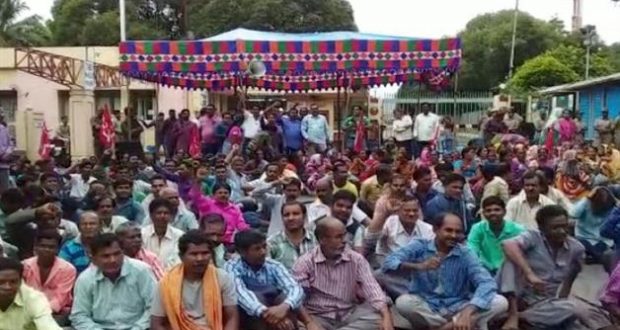 in District Diary August 31, 2018 Comments Off on JK Paper Mill contractual labourers after eight days of strike locked down the gates of the company 1,428 Views

Rayagada:31/8/18 :Tension erupted again at the JK Paper Mill in Jaykaypur of Rayagada district as the contractual labourers after eight days of strike locked down the gates of the company.

Reportedly, a meeting was held yesterday between the agitating workers and company management at the sub-collectors office but it remained inconclusive.

“Even after a number of discussions, the company authorities were unable to fulfill the demands of the worker. Because of which, the labourers took extreme measures by locking down the company,” said a source.

Earlier on 24th August, the labourers launched a cease work protest demanding the company authorities to fulfill their 14-point charter of demands.

The workers, through a 14-point charter, had been demanding provision of wages of Rs 18,000 per month, ‘equal pay for equal work’ in adherence to the  Supreme Court guideline and ESI and EPF benefits.

The agitators have also sought 12 days of casual leave and 15 days of festive leave, a group insurance of Rs 15 lakh and job regularisation of labourers, who have completed 10 years of service in the company.

2018-08-31
Editor in chief
Previous: The 21st century belongs to Asian countries:Dharmendra Pradhan
Next: Ollywood actor-comedian reacted to his death rumours doing the rounds on social media.