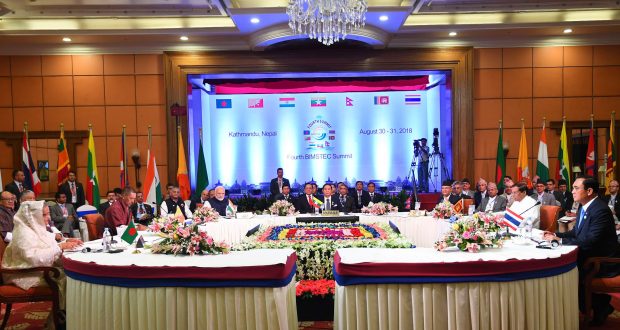 The Prime Minister, Shri Narendra Modi and other BIMSTEC leaders at the signing ceremony of BIMSTEC convention and the adoption of Kathmandu Declaration, in Nepal on August 31, 2018.

Affirming the solemn commitment to making the Bay of Bengal Region peaceful, prosperous and sustainable by building on our common strengths through our collective efforts; 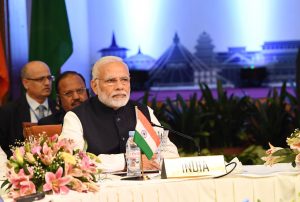 The Prime Minister, Shri Narendra Modi and other BIMSTEC leaders at the signing ceremony of BIMSTEC convention and the adoption of Kathmandu Declaration, in Nepal on August 31, 2018.

Recognizing that eradication of poverty is the greatest regional challenge in realization of development objectives and expressing firm commitment to working together for the implementation of the Agenda 2030 for Sustainable Development;Acknowledging that enhanced inter-linkages and inter-dependence within the economies and societies in the BIMSTEC Member States provide greater opportunity to advance regional cooperation;

Underlining the importance of multidimensional connectivity, which promotes synergy among connectivity frameworks in our region, as a key enabler to economic integration for shared prosperity;

Taking into consideration the importance of trade and investment as one of the major contributing factors for fostering economic and social development in the region.

Recognizing the special needs and circumstances of the least developed and land-locked developing countries in the region and underlining the necessity to provide meaningful support to their development process;

Recognizing that terrorism and transnational organized crimes continue to pose a great threat to international peace and security including in the BIMSTEC countries and stressing that combating terrorism and transnational organized crimes require sustained efforts and cooperation and comprehensive approach involving active participation and collaboration of the Member States;

Reaffirming strong commitment to making BIMSTEC a dynamic, effective and result-oriented regional organization for promoting a peaceful, prosperous and sustainable Bay of Bengal Region through meaningful cooperation and deeper integration;

Stressing the need for a fair, just, rule-based, equitable and transparent international order and reaffirming faith in the multilateralism with the United Nations at the centre and the rule-based international trading system;

Underscoring the importance of robust institutional arrangements to effectively steering the process of regional cooperation under BIMSTEC;

Taking Note of the participation and concurrence by the Chief Advisor of the Interim Government of Bhutan to the Summit decisions and its outcome documents on an ad referendum basis, as these are subject to endorsement by the next elected government;