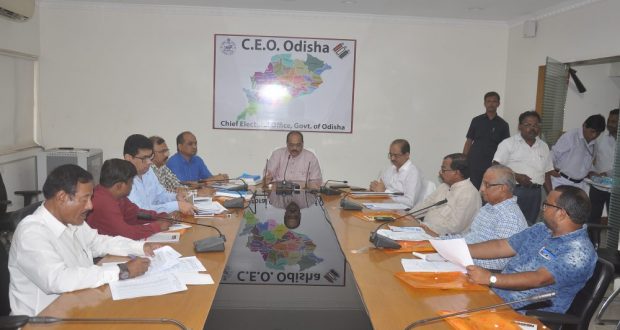 Bhubaneswar:30/8/148: With the general elections for Lok Sabha and Assembly seats drawing closer, the Chief Electoral Officer (CEO) of Odisha, Surendra Kumar, held an all-party meeting in Bhubaneswar on Thursday.

During the meeting, BJP demanded rationalisation of reformation of 36,000 booths in the state. Besides, there were demands to bring transparency in the electoral roll.

On the other hand, Congress and CPI and CPM raised questions over use of EVMs in the election. They proposed for ballot papers instead of EVM during the election.

Apart from revision in electoral roll, appointment of agents at booth level, use of electronic voting machines and voter-verified paper audit trail (VVPAT) and formation of new booths were also discussed during the meeting.

2018-08-30
Editor in chief
Previous: Odisha is Fast Emerging as a Manufacturing hub of Eastern India:Naveen Patnaik
Next: Director General of Policeordered crime branch probe into the alleged custodial death of a 25-year-old man in Mahakalpada police station