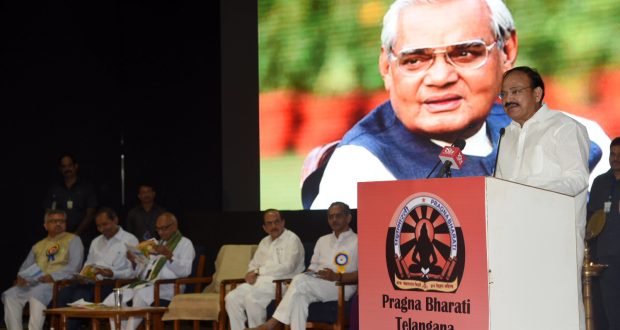 in National August 29, 2018 Comments Off on Vajpayee infused values into politics, ushered in the connectivity revolution:Vice President 816 Views

At a memorial lecture organised by Pragna Bharati in Hyderabad, the Vice President said that Shri Vajpayee’s Parliamentary contribution, administrative acumen and oratory skills have left an indelible impact on millions of Indians. He was India’s most loving leader, a true patriot and nationalist, he added. The Deputy Chief Minister of Telangana, Shri Mohammed Mahmood Ali and other dignitaries were present on the occasion.

The Vice President said that Shri Vajpayeeji practiced politics of principles and infused values into politics. He further said that he propagated and promoted an alternative political thought and had succeeded in providing a real alternative to the ruling party. He sowed the seeds of coalition by heading a government of 23 parties and he proved to be an able leader who provided a stable government, he added.

The Vice President said that Shri Vajpayeeji was a consensus builder and an Ajata shatru who had no enemies. The fact that he united the entire political spectrum in his death showed why he was called Ajata Shatru. What made Vajpayeeji endearing to all countrymen was the way he related to different sections of the society, he added.

The Vice President said that India had not seen a great leader like Vajpayee who used to accept defeat with dignity and equanimity. He was a great orator and always held the audience spellbound and he used to employ pause with telling effect, he added.

The Vice President said that Shri Vajpayeeji was a path-finder who ushered in the connectivity revolution in the country and implemented far reaching reforms in Governance. Some of the transformational changes he introduced had strengthened Indian economy and unleashed the forces of growth, he added.

The Vice President said that Sarva Shiksha Abhiyan, Pradhan Mantri Gram Sadak Yojana, Golden Quadrilateral project and political reforms of limiting the cabinet size to 15% of the legislature strength were among the game-changing initiatives taken during his regime.

The Vice President said that Shri Vajpayeeji was a steadfast leader in his resolve and could not be cowed down by any internal or external pressures. He further said that he enhanced India’s self-esteem through nuclear program. He had larger vision on the foreign policy and pursued multi-alignment in multi-polar world, he added.

The Vice President said that he was a unique person with a rare blend of diverse talents and he was a complete man. He further said that his qualities of Vyakthithva (personality), Vakruthva (oratory), karthruthva (devotion to duty), mithruthva (camaraderie) combined in Nethruthva (leadership) will be remembered forever. He will be a source of tremendous inspiration for many generations to come, he added.