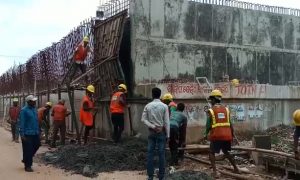 Jatani:29/8/18: In another jolt to Panda Infra Projects Private Limited, the state Works Department on Wednesday removed the construction firm from the Jatni flyover bridge project following allegations of inferior quality of work.

On August 9, a 5 x 5 feet iron plate of the under-construction overbridge near Kudiary Bazar in Jatani had collapsed following which the firm came under the government’s scanner.

The Jatni Traders’ Association had alleged poor quality of construction by the firm. They had claimed that the piling of the overbridge was done only 2o feet below the ground while it should be 60 feet deep.

In May this year, a vigilance probe was ordered by the State government into the alleged irregularities of the under-construction overbridge.

“The construction work was going at a very slow pace. The target to complete the flyover was 2015 but only 50 percent work has been done till date,” Works Department Secretary Nalinikant Pradhan said. He added that a fresh tender of the project will be floated within a month.

2018-08-29
Editor in chief
Previous: Odisha Chief Minister flagged off ‘My Heart Beats for Hockey’ campaign
Next: Modi government has given a big gift to the central government employees and pensioners